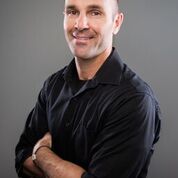 Warren grew up in MacGregor , Manitoba, Canada. Physical activity has always been an

integral part of his life and as a youngster he played hockey. Sometime at around the age of 8, Warren began experiencing migraine headaches and was taken to the local Chiropractor

to see what was causing the symptoms. It was discovered that Warren had a neck misalignment and he received his first adjustment. The results were immediate and a lifelong love affair with Chiropractic began.

In 1992, Warren graduated from MacGregor Collegiate, earning the prestigious Governor General’s Medal as the top student.

In 1996, Warren graduate with a Bachelor of Commerce from the University of Manitoba. During this time he continued his hockey career by playing in the Tiger Hills hockey league in Manitoba.

In 2000, Dr. Moore graduated from Life University, in Marietta, GA, with a Doctor of Chiropractic, finishing 2nd in his class of 150.

While attending Chiropractic College, Warren played for the Life University Skating Eagles and won the Division II National Championship 3 times, as well as becoming the assistant captain. Warren also began working with the (now defunct) Atlanta Thrashers as well. It was especially thrilling to work for an NHL team.

Upon graduation, Dr. Moore moved to Boise, ID, and began his career in 2000. This proved to be a tremendous start to his career, but he had always dreamed of living in Fairbanks, AK, and had constantly been on the lookout for an opportunity in the far north.

In early 2009, Dr. Moore had the opportunity to pursue a lifelong dream of becoming a Fairbanks Chiropractor, and he jumped at it. In the middle of January, 2009, he moved to Fairbanks to start work with Spaulding Chiropractic Clinic. Within a year, he had also become an owner.

Dr. Moore and his family have settled into Fairbanks and absolutely love it. They consider it home.

Dr. Moore has become involved in the local community and especially the hockey community. He coaches youth hockey each winter and his two boys both play.

Dr. Moore also plays in the Fairbanks Oldtimer Hockey League. Dr. Moore is actively involved with organizing hockey tournament travel teams and now uses hockey as a method to see the world. Since becoming a Fairbanks Chiropractor, he has played in hockey tournaments in Anchorage, Dawson City, and even Hawaii.

Dr. Moore is also an avid natural bodybuilder and all around fitness nut. He enjoys the local running events and can often be seen running with his entire family!

Dr. Warren M. Moore health philosophy:  Our natural state is health. Our body is a self-healing and self-regulating organism. Your best bet to be healthy is to be proactive. Keep your spine in alignment and moving well, stay active, eat real food, and don’t take life too seriously! Life is too short to hurt!